Both organism and ecosystem, these colourful chimeras are the quintessential core of their northern habitat.
By Lori Fox
•
Mar 25
•
2020
•
From the March/April 2020 Issue
In Peter Beagle’s classic fantasy novel, The Last Unicorn, the eponymous unicorn would appear as a simple white mare to anyone who did not already believe in her. So it goes with lichen; every day these unique organisms are stepped over, stomped on, mistaken for moss, even as they perform feats of biochemical spellcraft essential to the boreal environment.
Lichen are magic—or at least as close to magic as a real creature can be. To even call lichen a living “creature” is misleading. Although it looks like a plant, it’s not. Lichen are actually composite organisms made up of multiple creatures—typically an algae or cyanobacteria, fungi and, often, a yeast.
Chimera-like, these organisms live together in a complex symbiosis to form one of the North’s most under-recognized—and unappreciated—inhabitants.
“It’s a bit of irony, really, that the portion of Canada—in North America, really—that is most dominated by lichen has really got the fewest people looking at lichen,” says Trevor Goward, lichen taxonomist and curator with the University of British Columbia.
Despite their miniscule size and discreet appearance, lichen are essential to a healthy northern ecosystem. Their complex, symbiotic nature means lichen function both as organisms and ecosystems. They are what Goward calls “emergent properties—which is to say, they are different than the sum of their parts.” But as a whole, lichen are at the centre of the North’s food chain.
“Many of our ecosystems (in the Yukon) are dominated by lichen,” says Bruce Bennett, a plant and lichen specialist with the Yukon Conservation Data Centre (YCDC). “A lot of people are going to be surprised by that. They think of ecosystems being dominated by vas- cular plants, trees, grasses and things like this, but there are many places in the Yukon where the ground is white from all the caribou lichen.”
An offshoot of Yukon Environment, the YCDC gathers information on Yukon plants and animals in order to better assess and manage territory-specific conservation concerns. Despite their unusual make-up, however, lichenology remains an under-studied field in scientific study—especially in the Yukon.
“There’s quite a few lichenologists in Alaska and there’s been a lot of work by the Canadian Museum of Nature in the Northwest Territories and Nunavut, but almost no work done in Yukon,” says Bennett. The YCDC is trying to encourage and facilitate more lichen research, as right now there’s not even enough information available on most species to determine if there are conservation concerns.
What is known is the important actions lichen perform in their environment. One of the biggest, says Bennett, is soil stabilization.
“When an area has been disturbed, lichen and mosses form a crust on the surface,” he notes. “Lichen in many areas is the first thing to get established.”
In the Carcoss sand dunes, for example, you can find lichen forming a “crust” which holds the earth in place, Bennett says. Not only that, but a lot of lichen can ‘fix’ atmospheric nitrogen into those soils.
“When you get into colder climates, nitrogen is usually limited, and things don’t grow very well,” Goward says. Lichen is one of the few organisms, together with some mosses, that can take nitrogen from the air and process it into a form accessible through the soil. “They’re basically busy making habitat for everything else.” 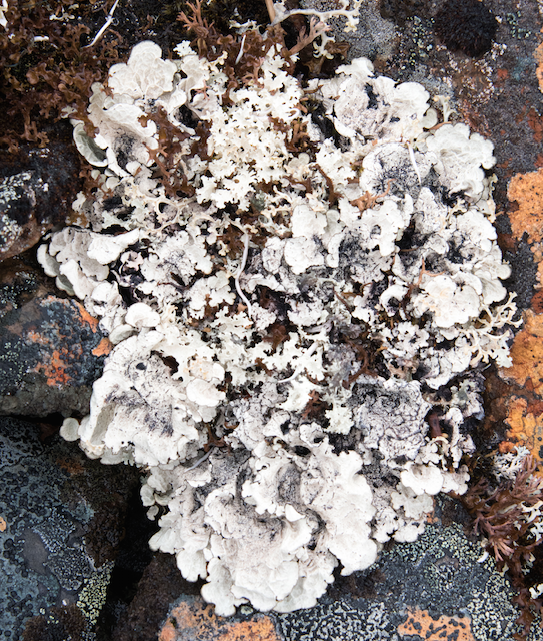 Although there are two primary types of lichen—macro, which have a leaf or bush-like appearance, and micro into which all other specimens are placed—there are thousands of different species. In fact, says Bennett, more than 1,000 different species of lichen can be found on just the shorter American side of the Chilkoot trail.
This grand diversity is owed in part to lichen’s highly mutable nature. Horsehair lichen (Bryoria fremontii)—a dark-brown, edible species, common in the northwest—is genetically identical to the yellow, poisonous tortured horsehair lichen (Bryoria tortuosa). The only difference between the two is the type of yeast in which they grow in symbiosis. In tortuosa, the yeast makes the lichen poisonous. Without the strain absent in fremontii, the lichen is edible. Prior to this discovery, published in a 2016 Science Magazine paper, no one had realized yeasts had any role in lichenology, a discovery which was actually based on earlier observations by Goward.
Lichen also loves to grow in pine forests, which dominate much of the Yukon, creating rich habitats for insects and much of “our lesser known biodiversity,” says Bennett. They also provide valuable foraging and nesting material for many species of birds and rodents, helping those animals keep warm, dry and safely camouflaged from predators.
Although caribou eat a variety of plants, lichen—particularly the aptly named caribou lichen (Cladonia rangiferina)—make up the majority of their winter diet. Every bite of tender caribou meat you’ve ever eaten owes the majority of its composition to the grey, finger-like fronds of this oft-overlooked boreal superstar.
Caribou lichen, often mistakenly called caribou moss, is sometimes eaten by humans, although it has to be boiled first to neutralize the naturally-occuring acids, which can otherwise cause stomach problems if eaten raw.
Some species of lichen are also thought to have medicinal properties. Old man’s beard—a soft, greenish lichen which grows in conjunction with spruce trees and can lend a grove a fey, magical appearance—is touted by many herbalists for its healing properties, including Beverley Gray of The Boreal Herbal. Old man’s beard is a member of the broad-ranging Usnea species and contains usnic acid; purported to have anti- viral, antibacterial and antifungal properties.
As with all wild foods, though, don’t just go putting lichen in your mouth or sticking it on wounds. Many species of lichen are toxic, and some people can be severely allergic. A competent foraging expert should always be consulted when wild harvesting.
Foragers should also be aware that, despite their ability to thrive in the frigid tundra, lichen are very sensitive. Their slow-growing nature can take a long time to recover when populations are damaged.
In 2008, Tombstone Territorial Park began erecting path markers to usher hikers onto more lichen-friendly trails. The feet of careless visitors were crushing the fragile lichen, damaging populations, says senior park ranger Lolita Hughes, especially in the warm summer months, when lichen is driest. Putting up the trail guides—which most people happily use, Hughes notes—has been a “saving grace” in the affected areas.
“We have way more visitors now (than in 2008) but the impact (on the lichen) has been reduced dramatically, like, even 10- fold.”
So watch your step hiking through the wilderness. And maybe next time you come across a patch of lichen, you’ll be able to better appreciate the magic of this overlooked northern unicorn.

More from Up Here

Peeling Back The River

Bobbi Rose Koe on launching an Indigenous tour company and heading out onto her ancestral lands on...

A lucky pilot. A never-before-seen natural phenomenon. A rush of scientists scrambling to witness...

The Canadian government announced interim protection this year for 320,000 kilometres of marine...

Johnny Appleseed Of The North

One wacky cultivar at a time, John Lenart is spreading ultra-hardy trees grown for subarctic...

Anatomy Of An Amauti

Behind The Look: Part 8

'In the Name of God, Please Come Back!'